An eerie novel of possession and compulsion, of a young woman propelled to fulfil a macabre destiny

Mitzi was tired. She looked through the French windows at the patio, the loungers stranded on the paving stones, stripped of their cushions, their metal frames like skeletons. One had been blown over by the wind, its feet sticking into the air, stricken. She leaned against the glass, feeling it cold on her face, trying to expel the weariness that was consuming her. She had chosen her clothes more carefully than normal that morning, putting on a Chanel all-in-one, white with gold buttons, and had painted her nails white, marvelling at the contrast with her tanned skin. Now, watching the weather pass, listening to the slight whistling noise the wind made as it forced its way through the window frame, she felt tired again.

She caught her reflection in the glass, the white and gold of her ensemble harsh against the muted greys of the world around her. On the other side of the window the girl from school, the strange one with the cropped hair, was standing on the patio with her hand raised, staring at her.

Mitzi moved back with a start, stumbling as her leg met the arm of a chair. The girl walked towards the window and knocked on it with her fingers, her hand forming a claw, her nails tapping against the glass. Behind her, Mitzi could see a solitary magpie standing on the lawn, its mouth noiselessly opening and closing.

Stephanie tapped on the glass again. One for sorrow, Mitzi thought to herself. She looked for her sunglasses, even though it was not sunny and she was inside, but they were in the hallway. She smiled, white teeth showing, nodded to the girl, and gestured to the window, a movement she realised was redundant because the girl was already there.

She pulled the latch down and heaved on the frame, feeling its weight gather momentum as it slid to the side. The girl did not move.

“That's alright, I was just...” Mitzi's voice trailed off. She hadn't been sure what she was going to say, and now she felt unsettled by this girl. “It’s...”

“That's right, Stephanie. You came at the beginning of the summer.”

Stephanie nodded, waiting until Mitzi noticed. She gasped when she saw it.

Stephanie touched the side of her face. “It's a scar,” she said.

“Yes.” Mitzi reached out to touch it, her hand passing from inside to outside, two fingers alighting on the tip of the scar, at the point of Stephanie’s cheekbone. The girl flinched, the pain smarting, but held her head steady as the older woman ran her fingers down the red gash, tracing the trajectory of the cut, feeling the undulations and roughness on the smooth skin of the girl’s cheek.

She brought her hand back inside.

“Come in, please,” she said, arranging her features into a smile. “You will catch a cold out there.”

Stephanie lifted her feet and stepped over the rail that held the window. Mitzi leaned against the handle and it slid back into place, sealing shut with a reassuring clunk.

Stephanie looked around the room. It was like stepping into an alien world. A pair of matching white leather sofas faced each other, a low square glass table between them. At one end of the room was a brick fireplace with an angular black metal and glass stove set inside it. There was, Stephanie noted, no wood stacked up as there was in the fire at home, ash and bark scattered around the hearth.

Stephanie looked at her feet. Her trainers were muddy from the walk to Lisa's house and had left a trail leading from the plate glass of the window to the cold steel of the fireplace, small footprints marking her passage across the wooden floor and over a deep white rug, thick like a bleached meadow.

“There aren't many things,” she said.

Mitzi looked around her, at the clean lines of the furniture, at the polished surfaces, appreciating the control the room exhibited.

“No,” she said, “I don't like things.” She was feeling more like herself now, invigorated by the unexpected presence of this strange girl.

Stephanie looked at her.

“No,” Stephanie said. “My brother did it, in preparation for a duel. It is part of the process you go through to toughen the mind, sharpen the senses.”

It was as if she were reciting a code, her voice dispassionate. There was a tension in the silence that followed, the moment suspended. Neither Mitzi nor Stephanie spoke. Away from the window, in the centre of the room, there was no sound, no noise penetrated from outside, no birdsong, not the cackle of the magpie nor the sigh of the wind. The tiny leaves of rose bushes ballooned silently across the lawn, flustered into activity by the rising breeze, swirling in on themselves like starlings preparing to flee winter's baleful grip.

“There's something I want to show you,” Mitzi announced, and walked out of the room, Stephanie following her across the hallway with its open staircase and pale wooden floor and into the room opposite. This room was smaller, lined with books, shelves reaching from the floor up to the ceiling along one wall. Blinds were drawn across the windows, wooden slats allowing only a muted light to filter into the room.

“My husband picked them up at an antique shop, ages ago,” she said. “It's not really his sort of thing. I think he just liked the look of them. Gerald is not normally one for impulse.”

She smiled and turned to the end of the room. Stephanie followed her gaze. High on the wall in the far corner hung two long pistols, facing each other, as if primed. Stephanie walked towards them, her heart beating. Each pistol had a central part made of wood, and a handle encased in black metal, gracefully curved like the neck of a swan. A thick ring of engraved metal looped around the trigger, and above it extended a long hexagonal barrel.

Stephanie's throat was thick. She swallowed twice before speaking.

Mitzi looked at her, elements of a smile forming on her face. Stephanie thought she might be mocking her.

“I don't know,” she said. “They're supposed to work but I'm not sure when they were last fired. I suppose it could be more than a hundred years ago. I don’t know if they have ever been fired in anger.”

Stephanie was absorbed in the two pistols. She thought they were the most beautiful things she had ever seen.

Mitzi did smile this time. Her face creased up, and Stephanie imagined all the sun cream being squeezed between the lines of Mitzi's skin, wondering if it would ooze out as her face puckered up in preparation for laughter. She swayed slightly.

“Well now,” she said, her voice deep, “for that you should really ask Geoffrey.” The day, which had promised its routine dose of perfectly manicured boredom, had become something much more interesting. She laughed, although it emerged as more of a growl than a laugh, like an animal, and looked at this curious girl, standing there, her scruffy clothes so out of place in Mitzi’s world. There was something appealing about her desperation, Mitzi thought, about the drama of the scar scything across her face.

Mitzi turned and left the room. Stephanie stared at the guns hanging on the wall, wondering if she could get them under her shirt. Before she could try Mitzi came back in, a wooden case in her hand.

“These are what they came in,” she said, placing the case on a table. “I’ll take them down.”

She pulled a sofa away from the wall and placed a chair beneath the pistols, standing on it to reach above her and take down one of the pistols. She placed it in the case and took the second pistol from the wall, the two nestled alongside each other in the case’s velvet lining.

Stephanie watched as Mitzi rearranged the furniture, positioning everything exactly as it had been, four hooks in the wall the only indication that the guns had ever been there. Mitzi stared at the space on the wall before turning back to the case. She closed the wooden lid and handed it to Stephanie.

“I don’t suppose he’ll notice,” she said, speaking to herself as much as to Stephanie. “He never comes in here anyway.”

Stephanie followed Mitzi out of the room, across the hallway, through the lounge and to the patio doors.

“You can go now,” Mitzi said, pulling the door open and standing with her hand on the latch. Stephanie nodded. She wasn’t sure what to say and decided that it would probably be better if she didn’t say anything at all. She stepped outside and Mitzi slid the window shut behind her. Stephanie raised her hand to wave but Mitzi had already turned away.

Mitzi walked across the lounge and turned on the radio. A woman’s voice wafted lazily into the room, “Is your mouth a little weak, when you open it to speak?

1st edition paperback, eBook edition and your name in the list of Super Patrons in the front of the book.
Choose this reward
FEATURED REWARD
£500  + shipping

Original artwork: hand letterpress print of the original Reward poster from 1807 by artist Ali Kayley, copper ink on graphite. Plus everything from Read With A Friend. One available 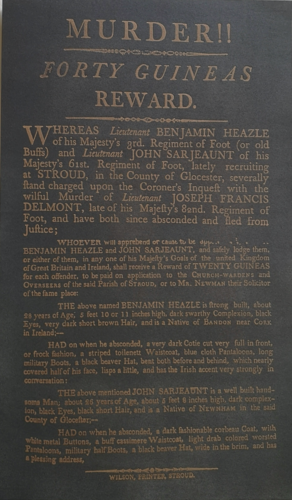