Roll up! Roll up! Comic Cons, Radio Stations and Theatres.

The crowdfunding wagon trundles on. In a near-last minute decision, I've taken a table at Leamington Comic Con on Saturday 5th October. I'll be there selling some of my comics, including my adaptation with the wonderful David Hitchcock of Charles Dickens' 'The Signal-Man' and my original graphic novel with James Gray, 'Amnesia Agents'. There'll be other sundries there too, but my main reason for having a table, of course, is to promote 'A Hundred Years to Arras', like a barrow boy showing passing trade how ripe my tomatoes are. The prize marrow this time will be (providing they arrive from the printer in time), some posters featuring artwork of a WW1 Tommy that artist Ian Gibson kindly donated. I've been really honoured in that some writers and artists whose work I've always admired and have been inspired by have pledged and supported the book. And this was a really generous way of Ian supporting. I just hope it turns out OK! If anyone who's already pledged would like one of the posters, just drop me a message and I'll send you one after the event (assuming the print quality comes out OK) or, if you're in Leamington on Saturday, do swing by and say hello! 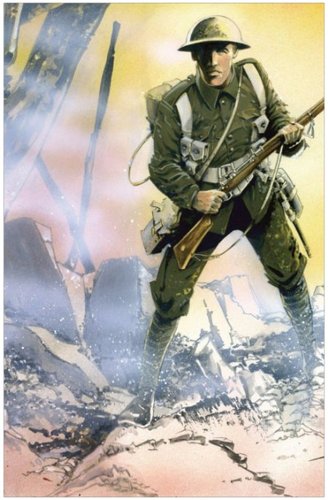 I've also (as I might have mentioned before...) got my own radio show on community radio in Kenilworth. Wednesday nights, 7pm to 9pm on www.radioabbey.com - it's a lot of fun, not least because I can indulge my own tastes in music. Last week's show has Steely Dan, Magnum, Bruce Springsteen and Thin Lizzy, amongst others. The previous week was my Thom Yorke special, and this week coming is probably going to have some Steve Hillage, The Fierce and the Dead and, if I manage to get the tracks uploaded to the system in time, an exclusive preview of tracks from the new Cosmic Rays album, featuring many comcis luminaries in its line-up, inlcuding a co-creator of The Walking Dead! Keeps me busy. It's my little thing for getting over the hump in the middle of the week that is Wednesday. I've also arguably abused my voluntary position as a DJ to promote the book (you can still direct potential supporters to my special on the book on Mixcloud here.

Even more interesting is what's coming up in November, where I'll be in Hull, having been invited by Ian Judson to this event where his play about Jack Harrison VC is being performed, proceeds to raise money for a ststaue to honour the man in the town. There's a link, in that my Robert Gooding Henson fought at the beginning of the Battle of Arras, and Jack's heroism was at the tail end, meeting his fate at Oppy Wood some time later. I'm honoured to have been invited and looking forward to it.