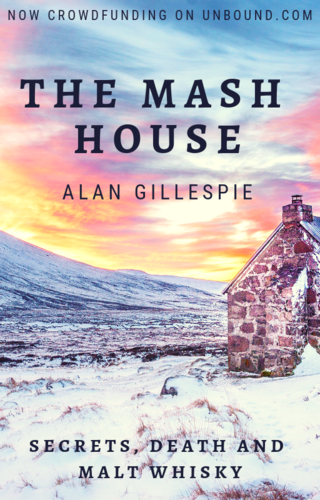 Good morning / afternoon / evening, Troops! We're so near to 50% I can almost touch it. I guess it's a psychological benchmark in that we could hopefully gain a bit more momentum after that point, so please do direct anyone this way who you think would be interested in the book.

One of the best things about doing this crowdfunding thing is that it's really opened up my eyes to a whole wealth of other books. Unbound is not only a great publisher, it offers a community of sorts for fellow crowdfunding authors. I'd therefore like to take this opportunity to introduce you to one of the other authors who is taking pre-orders on Unbound. Like me, Alan Gillespie is a Head of English who also writes. His book is called 'The Mash House'. It's a little further along in the crowdfunding process than 100 Years to Arras, and I can thoroughly recommend it. You can check it out here: https://unbound.com/books/the-mash-house/ and, rather than me tell you what it's about, do click the link but not before you've read the interview I did with Alan below:

1. The Mash House is a great title with a great premise. Maybe it's just because of the setting, but it reminds of something that the late Iain Banks might have come up with. Were you conscious of any particular influences like that in writing the book?

It’s funny you should mention Iain Banks. He’s a real influence in the way I think about writing. My mum bought me a copy of his Wasp Factory when I was about 15. And probably too young to read such a dark book. But I loved it, and I loaned it to all my pals at school. Banks was from Fife, where I grew up, so he showed me that writing was a real thing that real people could do. It doesn’t need to be a privileged, elitist thing. In 2012 I was working in the West Highlands as a teacher, and my school hosted the Three Lochs Festival. Banks was the headline act, and they asked me to facilitate the Q&A. So I got to hang out with him for a bit and find out about how he wrote. He started a book on January 1st, every year, had it finished by Easter and published in the summer. Then he’d take the rest of the year off, travelling, driving fast cars, playing music. And start all over again in the new year. An unbelievable talent, and a very funny man. He’s such a big loss. Imagine the books he didn’t get to write. So yes; The Mash House owes a lot to Iain and his legacy.

2. Where will The Mash House sit in the roster of Scottish writers when it comes out? Is it a 'Scottish' novel or is that incidental?

There’s no doubt that the novel has a heavy Scottish flavour. It’s set in a fictional village in the West Highlands and the characters are reliant on that frame of reference. One of the major plot strands surrounds a power struggle in the local whisky distillery. But I’ve decided not to write the book in Scots dialect. I’ve written lots of short stories in Scots, and I enjoy it. For some reason it didn’t seem right for this book. That’s not to say the characters don’t speak with a Scottish ‘accent’ – I think you can find ways to play about with sentence structures and syntax to recreate the way Scots speak, without mucking about with the spelling and recreating the language phonetically. It’s a Scottish novel but I really hope that it has a wider appeal; like a good malt whisky.

3. The book seems to have a had a good profile throughout the Unbound campaign. How have you managed it? What has been your USP in getting people to sign up?

It’s funny how perspectives can differ. I’ve felt like it’s struggled to maintain momentum at times. The book’s never been top of the ‘trending’ list on Unbound; other books have started and funded within the time I’ve been going. But I’m comfortable using social media, so I’ve been able to use that to my advantage. I like interacting with people on twitter about other things. I think if you’re exclusively shilling your book you’re going to lose interest. I’m sure I’ve been guilty of that a few times. But my friends and family have been wonderful as well. I’ve got this great group of pals from school, we hardly ever see each other, but they’ve all chipped in and shared and encouraged me. And I’ve got a great job, as Head of English, at a brilliant school in Glasgow. Lots of my pupils, parents and colleagues have pledged to buy books. I’ve also, to be frank, been completely shameless at times. Asked people out of the blue. Reminded them when they’ve forgotten.

So let’s put this out there again: if any of Jason’s supporters are still reading this far, please, I’m begging you, support The Mash House. I’m sure you know how hard this crowdfunding gig is. You’ll be helping me turn my childhood dream into a reality.

I’d probably want to take The Wasp Factory, but since I’ve mentioned that already let’s just say I’ll sneak that one in, folded up in my back pocket.

Firstly I’d have to take in a book by the sensational George MacDonald Fraser. He was a writer and journalist and editor of the Glasgow Herald. Every book he published is a treasure, but for sheer entertainment The Flashman Papers are unrivalled. There are 12 volumes. Harry Flashman must be the one of the most consistently well-developed characters in literature. It’s action, adventure, scandal, politics, history, and humour all in the one place. Of the collection, I’d take Flashman and the Redskins, as it’s the chunkiest.

There’s an American writer I’m vaguely in love with called Kent Haruf. He might be the most underrated writer I know of. He wrote this trilogy of books set in Colorado, and they are all beautiful and stark and gripping. I’d take one of these – probably the first, which is called Plainsong – because I could read it over and over again without ever tiring of it. The McPheron brothers absolutely break my heart. When I’m struggling to write, to form my own sentences, I can read a couple pages of Haruf and I’m right back in the groove.

Finally, I’d take Irvine Welsh’s Acid House. It’s a collection of the most bizarre and jolting short stories. People talk about Trainspotting but, for me, this is superior. There’s a story about a baby who swaps bodies with a junkie. There’s a story about all these supermodels in LA watching a telly show about Edinburgh neds. There’s a story about a guy who turns into a fly and it has one of the best/worst endings to a story I’ve ever read. I haven’t read the book in ten years yet I can remember all these details without needing to flick through it. It’s a great book, with some absolute belters in it.

5. This isn't as simple a question as it might appear... Imagine The Mash House is a huge success and Booker Prize winner. Would you give up the day job, knowing that your days ahead would be filled with the expectation of having to come up with The Great Follow-up Novel?

As mentioned, I am fortunate to have a job that I love. I teach English to some of the best young people I could imagine, and every day is a joy. So I wouldn’t be giving that up any time soon. Maybe I could see myself going part-time to give myself more time to write. But that’s a long way away. I need to get this book funded and into good shape first. And if anyone reading this fancies helping out, I’d be incredibly grateful.

Alan's also interviewed me, so whilst you're visiting his page, why not check out the interview with me at the same time? https://unbound.com/books/the-mash-house/updates/meet-the-author-jason-cobley