It's been hot. Too hot for me. Forunately (or unfortunately, depending on how you look at it), I've been somewhat tied to the house this week. We adopted a dog from The Dog's Trust last week, and she's settling in nicely, although slightly nervous. She still doesn't quite have to confidence to venture any further than she can see out of the window. We tried walking her around the block, but as soon as we got to the end of the road, she sat down. This will come in time - I've never known a dog who doesn't like long walks. She's a husky / collie cross who came with the name of Cassie. She already responds to it, so we kept her name, except I've christened Queen Cassandra as she can be a little precious. She's not so precious when it comes to our other pets though. We have two rabbits, and she's been very excited to meet them. We put the rabbits in a covered pen on the lawn, and they went nose to nose with the dog. They're not bothered. It's been interesting, though, training our new family member. When dogs come from places like The Dog's Trust, many of them have had a hard time and are suffering from PTSD that can manifest itself in many different ways. It's proving to be good for us all, though.

One of the things that I researched in writing the novel was the relationships that many soldiers formed with animals in the trenches - keeping wild rabbits as pets, taking in stray dogs - even stealing and dealing them (this is a plot point in the novel, spoiler fans). Robert Gooding Henson, as the son of a farmer, has a strong connection to the countryside that he brings with him to the trenches of France, and I suppose this is one of the themes that I explore in the book.

Our relationships with other animals and indeed the environment around us is important. As I write, we've had some rain this Saturday morning, so the heat that has tired us all out has dissipated and brought some relief. I'm hoping that at some point this weekend, Queen Cassandra and I will get further than the end of the road. 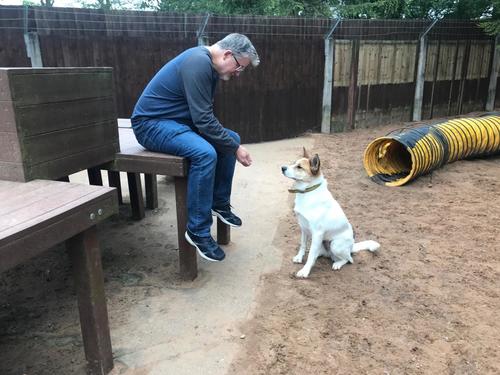