An extract... barbed wire and banter. 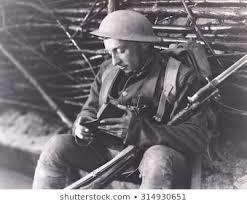 I promised another extract. This is taken from later in the novel, where the friends Robert, Stanley and Ernest are following orders to break through the enemy barbed wire...

“What are you doing?” It was Ernest, beside him, ducking, half crouching, bayonet forward, ready to press on.

“Fall in then! Come on! Stand still and you’re target practice!” Ernest replied, dragging his friend by the sleeve.

“There, just over the rise in the ground. There’s an old trench past the wire,” he replied, pointing. Ahead, a party of men were huddled, hacking at the barbed wire that bundled over the edge, their barrier to the trench. No-man’s land was intersected by numerous old trenches. Earlier in the year, German attacks had forced the British to abandon them. Now, the objective was to re-occupy them.

Robert and Ernest ran as best they could towards the other men, heads down as rifle fire sliced unseen through the air overhead.

Another private, taller than Robert, pushed past, aiming his rifle as high as he could see, peering above, looking for crouching enemy. A bullet found his forehead and he fell sideways, his weight tumbling against Robert’s legs. He kept his footing enough to dive behind the fallen man, his full pack a shield against the soil that rained down from another shell burst.

Ernest dove and rolled, landing at the base of the rise where the others were snipping at barbed wire. He lay on his side, angling his head back towards Robert. Robert peered around the dead man’s boots that lay sideways.

“What are we doing?” hissed Robert, hoping Ernest could hear him.

“Don’t bother whispering,” he called back. “It’s not like the Germans can hear us talking above their own gunfire, is it?”

“Shall I come over to you?”

“Looks like our left flank is exposed. God knows about the rear. We should hold it here until we get called back. Get through the wire if we can,” he said, gesturing to the wire cutters a few feet up the slope.

Robert was just inches away from Ernest, crawling on his stomach, when the shell hit. They were below the point of impact, so were only showered by the debris of the exploding men. Something heavy bounced off Robert’s helmet, driving his back molars together. He looked down as the object settled: a torn and bloodied torso listing on the ground. The twisted wreckage of limbs and bent tools lay on the slope above, intertwined with ruptured barbed wire, branches of black and red metal.

Robert stifled a cry, biting the back of his hand. Ernest gazed with awe at the gory sight. “There’s a gap in the fence now,” he said.

“But the Germans… they shelled it. They’ll know we’re coming through”.

“Doubt it. Reckon that was one of ours”.

Ernest was crawling up the rise, wrenching a set of wire cutters from a dead man’s grip. The smoke drifting with the breeze covered his movements as he snipped the lower coils of barbed wire. Then, taking a breath, he got to his feet, exposed but for the rolling smoke, and finished the job. He tumbled back down to Robert’s position, brandishing the wire cutters like a trophy.

“Well, that’s one job to tick off the list for today,” he said.

“Reckon we make our way through the gap. You game?”

Both hoisted themselves to their feet, packs secured, bayonets before them, and took the gap in the fence at a charge.