A Hundred Years to Arras: And we're launched!

This is where it all began:

The attack began at 5.30 a.m on 9th April 1917. It was a Monday. Depending on your attitude to work, Monday mornings are full of either expectation or trepidation. Knowing what faced them, many having already lived through the Somme earlier in the Great War, trepidation was the least the young men of the British and Canadian regiments were feeling as they prepared to face thousands of young Germans who were feeling the fear and uncertainty.

There was heavy rain - some accounts say even an April snowstorm - but then the weather cleared. The original attack was successful but, like every conflict during the Great War and since, it was not that simple.

The Second Battle of Arras ended by 15th April. Six days of sliding, sucking mud, suffocating gas bombs and indiscriminate rifle fire ended with too many soldiers dead on the battlefield, and even more dying slowly from their injuries.

Robert Gooding Henson  was in the 4th Division of the Somerset Light Infantry, one of 84,000 men on the front line at Arras. He was my father's grandmother's sister's son.

As I write, it is 27th July 2016. In a little under nine months, it will be the one hundredth anniversary of my relative's death at Arras. I only discovered that he even existed very recently. My father, who is in his seventies, had been talking with his elder sister about the anniversary of the Battle of the Somme that had been commemorated all over the media. Being in her eighties, my Aunt's memory is not what it was, but like many of her age, short term memory is unreliable but long-term memories can re-emerge crystal clear, and she told my father about his first cousin once removed, Robert Gooding Henson.

I am now in my forties and had believed all this time that we had no relatives who fought in the Great War. My father's father - and my mother's father - were both Welsh miners so were needed underground and did not fight during World War Two. Although many Welshmen did fight in World War One, I had always believed our relatives stayed down the pit so neither I nor my father investigated further. However, Robert Gooding Henson was not from Wales. My father's family had originated in Somerset and had moved to Wales later. We are separated by generations and a century, but on 22nd April 2017, I will be taking my own family to visit his graveside in France. The hundred years to Arras begins here.

That was my first blog entry in 2016, where I began the process that led to this novel, A Hundred Years to Arras. Writing now, in June 2019, we're on Unbound. As of today, we've reached 7% of the target. Thank you so much to those who have backed so far and even more who have promised to. I love you all anyway, but your support means so much. It's been shared on social media but there's always room for more sharing! Please send anyone who you think might be interested in this direction. Responses so far have been overwhelmingly positive, even one that decried the glorifying of war. That's something that the story doesn't do - it's a human story about people against the backdrop of the Great War. If anything, I hope it glorifies people and our connections to each other.

Momentum is building: Radio Abbey in Kenilworth has A Hundred Years to Arras as its book of the week! Thanks so much to all my colleagues at the radio station, especially Victoria and the Bradleys, for helping to get the word out! As I type, I'm just getting ready to go and host my own show. Do tune in to Cobley's Classic Rock and Prog Show each Wednesday from 7pm to 9pm, and let me know if you have any requests. Priority for choosing playlists go to my backers! Whilst you're at it, you could check out Victoria BookFolk show on Thursdays from 5pm to 7pm. Books are great, aren't they? 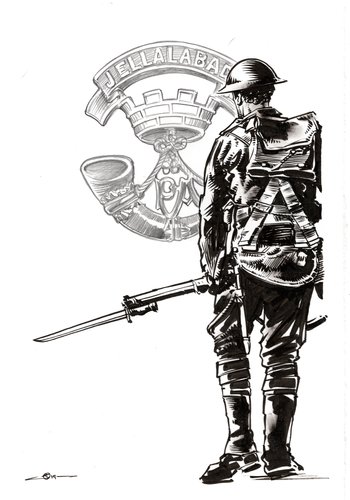