By Ella Buchan and Alessandra Pino, with illustrations by Lee Henry

A feast for the senses: an illustrated cookbook inspired by classic and contemporary Gothic texts.

Have a (virtual) cocktail on us

After a little over a week, A Gothic Cookbook is already one-fifth funded. We're thrilled that so many people "get" our proudly strange cookbook because, let's face it, it isn't exactly your traditional kitchen tome.

We've been busy testing recipes (time-consuming but, we'll admit, fun) including "Mrs Poole's Gin & Tonic Cake, AKA Bertha's Escape". We're also playing around with some Gothic cocktails (again, we'll admit, not too taxing a job). The book will definitely have some drinks, such as the Hot Negus that welcomes Jane Eyre at Thornfield, and we're just deciding how many and which ones. We'll keep you posted on that.

In the meantime, thank you so much to all of our supporters so far. We had a great week with lots of new pledges, and (although it probably isn't a very Gothic thing to say) it makes us feel warm and fuzzy that so many people are as taken with the idea as we are. You're all marvellous.

If you know anyone – or any groups, from Gothic to gourmet – that might want to hear about the project, please do share. The sooner we reach our target, the sooner our book lands in your kitchen library.

We'd love to buy you all a drink but, for now, please accept this gloriously green illustration of a Corpse Reviver 1818 (a nod to Mary Shelley's publication date). If you fancy making a real one, check out the highlights on our Instagram page, @agothiccookbook (we're on Twitter, too). 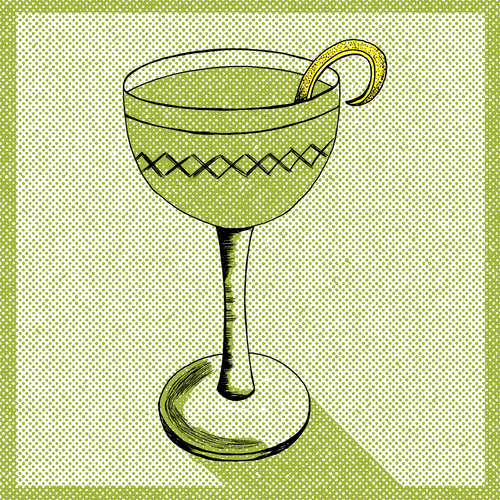