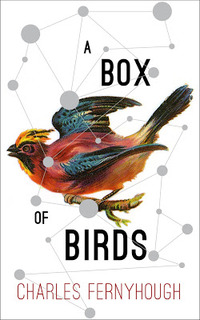 User reviews for A Box Of Birds

This book has 1 review with an average rating of 5 stars.

Taken from Metaliterature.blogspot.co.uk with the author's consent.

Straight off the bat, as a matter of both principle and habitual need to be accepted even if I am spouting drivel, there are two apologies to be made. Cue scraping chairs, muttered oaths and weary but sharp exits. Firstly, as the author of the book is quite likely to at least look at this review (likely because I will be making him aware of its presence and will also duplicate it on the Unbound website, whence I did buy said book) please understand that I may use hyperbolic terms in support of his literary and scholarly talents. These can be read as exaggerated praise in the hope of reciprocity of an undetermined kind, either immediate or future; I may be looking for work and in need of an astounding reference (or indeed an astounding psychiatrist). Secondly, as is typical of most amateur reviewers, I shall be relating much of this book to my experiences using the first person singular perspective much maligned by a grumpy Tibor Fischer in 2003 (yes, I’m back there again). Whether or not that ultimately adds or subtracts from your enjoyment of the book is of no interest to me, but please feel free to attempt to enlighten me in the comments section below (for readers on Blogger only).

A few contextual titbits for uninformed to start with, then. A Box Of Birds is another fine novel published by Unbound, a company currently triggering in me both joy and guilt-ridden despair because a) they do publish exceedingly good books across a whole range of genres and b) they publish so many good books that I can’t possibly pledge support for them all at the level I would like (to secure goodies and party invites etc.) and this makes me feel as though those authors to whom I would dearly love to express my gratitude and felicitations through such an act might feel less grateful than I would have hoped because I can’t afford to buy the cloth bound hardback with gilt edges and hand-stitched personal dedication. But this is my own problem.

Plot wise then, and I hope not to reveal too much, Yvonne Churcher is a neuroscientist, a hollow woman bereft in many senses (of love, emotional intelligence and hope), about whose job as a vivisectionist at a fictional state-funded college she is ambivalent. There is some evidence of a degree of cognitive dissonance which probably exacerbates her existing disconnection with her emotional life. Into this personal void waltz two students, one handsome and cool, one manic and beguiling, with enthralling results.

Yvonne uses her materialism, her belief that a mutually unaware collection of systems and cells acting in parallel to complete genetically assigned tasks combines unwittingly to form the illusion of the self, to isolate herself from others, even going so far as to live in a nearly deserted part of the campus in a tree house. This professed belief permits her indulgence of the fear of interaction with others on a more profound level that that of the purely functional, but Fernyhough seems to enjoy providing evidence to the contrary – Yvonne’s ego surely could not rationalise to her id the feeding of a chimp, emancipated from the local evil biotech, or the continued support of an elderly friend whose own progressive dementia, fuelled by cancer and strokes, also serendipitously provides her with a narrative outlet at the conclusion of the novel in the form of her nurse, Daren. She battles constantly, externally and internally to maintain her rigid stance. At a counterpoint to Yvonne’s materialism, James Bonham, suave, dangerous and all too confusingly alluring student and activist, believes in the power of the history, the path along which one has walked, to influence character and fate, that he is the sum of his past almost to the point of denying any input from nature. Somewhere along the spectrum is Gareth, obsessive and brilliant, wishing for a world where the self can control the system (Plato’s aviary serving as both metaphor and physical allegory and lending the author his title) and attempting to manipulate events so that Yvonne can see for herself the ‘truth’ he has laid out for her to discover.

I confess to knowing very little about the topography of the philosophical battle ground between neuroscientist and psychiatrist. If I were a reflective rather than reflexive sort, I might muse upon the similarity of Yvonne’s position and my own, wherein the only constant in my behaviour seems to be the inconsistency, itself responsive only to the contemporary situation – I’m greedy, selfish and morally dubious by most standards*. I might also wonder at the romantic facet of my psychic life, whence spring rather naive and forlorn hopes including such wishful bull-poppy as becoming a Writer and having the Perfect Marriage – I’m a bit of a fool. Likewise I admit to lacunae when it comes to understanding surgical intervention in and the causes of dementia and related brain diseases - I’m no brain surgeon. But I did absolutely and thoroughly enjoy this book, understanding what Fernyhough was saying about neuroscience (I trust) as well as what his characters were saying (on a practical level), wherein lies the gift of the author for suspending disbelief with his superior intellect, literary genius, and patient and benevolent erudition**. Like I say, I don’t know how realistic it all might be, with theories being bunged around about electrical stimulation of memory centres, controllable by the individual, but it was with a shiver that I caught a general interest programme on Radio 4 a day or so ago where a chap had undergone brain surgery, with no general anaesthetic, to insert rods into his brain powered by a battery embedded in his chest, to control a permanent and progressive tremor of his muscles... Spooky. You’ll understand when you get to that bit.

All in all I hope he is satisfied with his output and that it does indeed surpass what he himself calls "the old-fashioned ideas of self, subjectivity, love and so on" to be found in other books attempting something similar. In my humble opinion, it does what he set out for it to do: it is a good book, he is an excellent writer, and I would hope that this review goes some way to both raising awareness of Fernyhough as an author and Unbound as a concept AND business that deserves support, and to securing me some kudos or other vicarious reward. I’d hate to think what a psychiatrist would make of that.

*I refer you to apology number two.