The plant with the sticky leaves 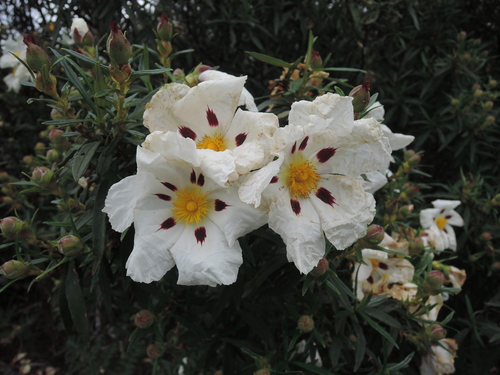 We've had a summer house just north of Madrid for about 15 years and we see these blooms every year, flowering for about a month.  Walking through hillsides of the shrubs growing wild, I love the smell of them and, interestingly enough, it doesn't come from the flowers but from the sticky leaves.  I often thought, if a perfumer could come here and bottle this stuff, it would be a roaring success - it is sweet, musky and vanilla-ish, if you can imagine that.
Today I realized I didn't know the name of this much-admired bloom so spent a while finding it on the net - it wasn't straightforward.  There are only some varieties with the sticky leaves and only some with the deep red dot on the petal.  What we have here is a variety of the CISTUS SHRUB which is also known as the rock rose after its ability to grow in dry rocky places.  The Royal Horticultural Society has a list of the varieties - https://www.rhs.org.uk/plants/search-results?query=Cistus - but it's hard to know which one is ours, it could be one of about 5 varities.
I also discovered the LABDAMUM, the sticky resin on the leaves,  very sticky on the variety we have here, is already a well-known and harvested perfume!  In fact, it is generally viewed as a reliable substitute for ambergris (the whale vomit that washes up on beaches and sells for tens of thousands).  Anyway, as it is illegal to hunt the threatened sperm whale who cough up this rather expensive hairball, the sticky resin on the Cistus shrub is cheaper and more readily available along with being a very close copy.  Nowadays, the leaves are boiled, but in the past so Wikipedia tells me, there was a innovative collection method involving goats...
'In ancient times, labdanum was collected by combing the beards and thighs of goats and sheep that had grazed on the cistus shrubs.[1] Wooden instruments used were referred to in 19th-century Crete as ergastiri;[2] a lambadistrion ("labdanum-gatherer") was a kind of rake to which a double row of leathern thongs were fixed instead of teeth.[3] These were used to sweep the shrubs and collect the resin which was later extracted. It was collected by the shepherds and sold to coastal traders. The resin was used as an ingredient for incense, and medicinally to treat colds, coughs, menstrual problems and rheumatism.'
Interesting therefore that this area of Central Spain which is well-known for its goat herding history, we have mountains and towns with goat in their names - I wonder if the cistus was planted with the collection of it from the goats' hair in mind...?
And here is said labdanum gatherer for use with a goat! (I'm going to put it on my Christmas list)...
​​ 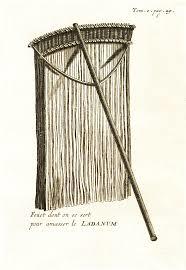 Have a look/follow here for some fun weekly observation  https://aurielroe.wixsite.com/aurielroe/single-post/2018/06/14/The-plant-with-the-sticky-leaves

I see you can buy labdamum essential oil so you can smell it all year round... https://www.edenbotanicals.com/labdanum-absolute-clear.html
And it's a popular incense ingredient... http://www.mermadearts.com/product_info.php?products_id=7648