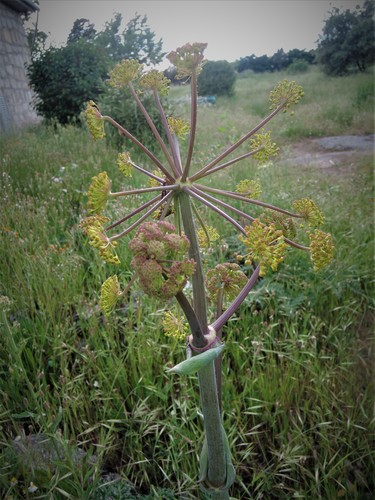 Scattered about the hills north of Madrid, we see this yellow plant growing more numerous every summer. Its bloom, shaped rather like a virus under the microscope, adds a vivid colour, it's true, but what exactly is it and is it the pest we presume it to be?

We referred to it as Giant Hogweed in the past, but I see now that it is a lesser relative of this particular invasive species, lesser as in smaller and slightly less poisonous than Giant Hogweed. Our yellow-flowered plant is Wild Parsnip and yes, its parsnip roots are edible although the sap of the stem and leaves, like Giant Hogweed, will blister and burn your skin, possibly even blind you so harvesting would be a dicey enterprise.

Giant Hogweed or Heracleum mantegazzianum is indeed Heracleum in its persistence, reaching heights of over 2m with its acid sap and rampant ability to spread everywhere. Destroying it is like destroying Hercules.

Giant Hogweed was introduced to Europe and America in the 19th century as an ornamental species from Asia!

Japanese Knotweed, that old chestnut, was discovered growing on the slopes of a Japanese volcano by German botanist Philipp von Siebold, (who was actually the father of the first female Japanese doctor). Anyhow, he sent a package of it to Kew Gardens, and this interesting ornamental find became popular. In Wales, it was useful to grow it upon slag heaps to stabilise soil. Cuttings were shared and everyone was happy. But then, like the magic porridge pot, the green stuff wouldn't stop spreading. It is the bane of anyone trying to sell their house if it rears its ugly head in their garden. One man in Sheffield cited Japanese Knotweed in his garden in his suicide note after he'd murdered his wife.

Grasping for the positive side and unlike Hogweed, Knotweed is edible – the Japanese eat the young stem which apparently tastes like very sour rhubarb which doesn't sound overly alluring... they actually call it Donkey Rhubarb. It's also used in Asian medicine mainly for cardio. The strong capacity it has for flowering is particularly prized with bee keepers as it flowers when nothing else is flowering. I wonder if it can't be utilised as rapid grow animal feed or cheap salad ingredients in the West – if we can't get rid of it, could we make use of it somehow where it's growing rampant?

Anyway, I've just been talking about 3 invasive species – here's Wikipedia's page on the 100 most invasive species so batten the hatches before you are set upon by the 'Black Wattle', the 'Yellow Crazy Ant', the 'Large Mouth Bass', the 'Red Eared Slider' or the 'Crayfish Plague'!  https://en.wikipedia.org/wiki/List_of_globally_invasive_species

Subscribe to my weekly blog here - https://aurielroe.wixsite.com/aurielroe - and help me 'enhance my web presence' which apparently helps along my writing career (it's a numbers game!).