Naomi Kenyon has been drawing more illustrations of the individuals who have helped make our country what it is. Here are just two.

Alek Wek was born in South Sudan in a house without running water or electricity. Fleeing civil war, she arrived in London and almost immediately changed the fashion industry.

She was the first African model to appear on the front cover of Elle, helping to overturn the dominance of the Caucasian notion of beauty. She has devoted time to humanitarian work, promoting the UN Refugee Council, World Vision and Doctors Without Borders. 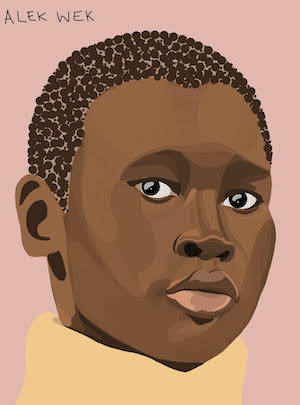 Magdi Yacoub was born in Al Sharqia, Egypt. At an early age he decided he would follow in his father's footsteps and become a surgeon. When his aunt died of heart complications, it was clear what his specialism should be.

Magdi became a consultant cardiothoracic surgeon at Harefield Hospital, London, where he performed the UK's first successful heart and lung surgery. As a professor at the National Heart and Lung Institute, he developed more sophisticated techniques for heart and lung transplants. He also pioneered a methods of combating a congenital heart defect in babies.

So.. we are almost half-way to our crowdfunding total. As you know, every supporter gets a copy of the book.So, don't wait, do a good deed now, and get a terrific book!

The hardback at a special early-bird price, with your name in the back.
£20  + shipping
37 pledges