An illustrated anthology in which 26 writers respond to 26 treasures in 4 museums, using only 62 words 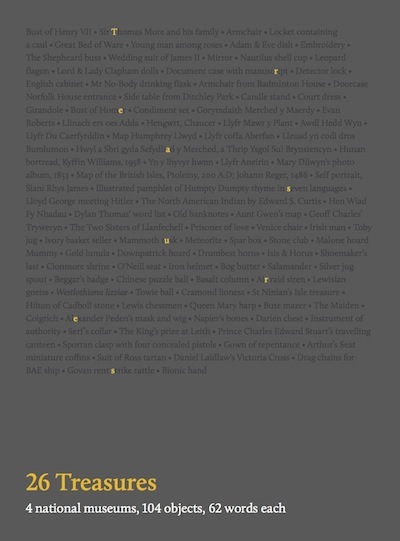 Campaigns | Short stories
You made 26 Treasures a reality. It's available in all good book stores now.
$4
64 pledges

1st edition hardback copy of the book signed by at least four of the authors, & a copy of the ebook.

Tour with an author to see featured treasures in one of three museums (Edinburgh, Belfast or London - your choice, includes coffee with the author)

1st edition hardback copy of the book with your name in the back and a copy of the ebook.

40% discount on a Dark Angels course

Imagine you’re in a museum. You might spot a gargantuan four-poster bed that was a 16th century pub tourist attraction or a threadbare sackcloth robe worn in church by a 17th century adulteress.

Yet despite their rarity, we often fail to engage with these extraordinary objects. We simply nod and move on.

But it doesn’t have to be that way. Through its 26 Treasures project, writers’ collective 26 is exploring how to create emotional connections between objects and individuals.

In 2010, London’s Victoria & Albert museum chose 26 objects from its British Galleries and randomly assigned them to 26 writers. Each person wrote exactly 62 words – 26 in reflection – in response to the object.

The results were beautiful, surprising, lyrical, sometimes comical. Andrew Motion wrote about a bust of Homer, a 17th century Chinese porcelain figure reminded a writer of a pub landlord in Inverness, while the wedding suit of James 11 inspired 62 words about “a suit as full of scratches as a rose-garden”.

In 2011 we took the idea to the National Library of Wales, the Ulster Museum and the National Museum of Scotland, where writers were let loose on objects as disparate as a mediaeval illuminated book, a beggar’s badge and a 16th century Scottish guillotine.

It’s a fascinating insight into 21st century writers' perspectives on British cultural history. So please help us publish this beautiful collection of visual and verbal curiosities.

1st edition hardback copy of the book signed by at least four of the authors, & a copy of the ebook.