There are so many things connected with the number 64. The 64K address space of 16 bits (0 to 65535). The numeral on machines such as the Dragon, Pecom, and Oric Nova. And the year in which BASIC was created.

But it's also the threshold in a slightly obscure piece of Spanish legislation from September 1985. The law was that any imported computer with 64K (or less) memory, would be taxed at the rate of 15,000 pesetas per machine. Consequently Amstrad, who were wanting to sell their 64K CPC 464 machine into the Spanish market, would see their 25,000 peseta price tag raised to 40,000. That would certainly kill any chance of sales in the country. So they upgraded the RAM to 72K, by adding an 8K chip onto a new daughterboard. 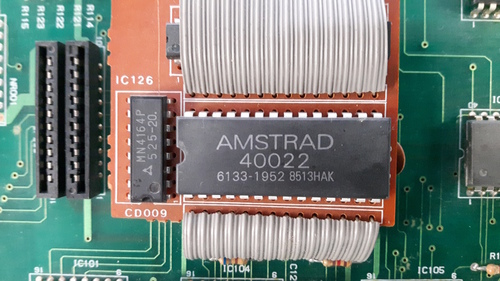 However, as we've seen, the address space of a 16-bit machine is only 64K so extra circuitry would be required to make use of this memory. Other computers of the era would using bank switching technology, or something similar, allowing the programmer to choose which memory chip (in its entirety) would be used at any given time. Amstrad didn't. Their solution was simply to not connect the chip! This meant they could print 72k on the case, show any customs officers who might interested that there were 72k worth of memory chips inside the machine, and import their machine into the Spanish market at a reasonable price.

It was called the Amstrad CPC 472.

It is not known if these chips even worked. Maybe they were taken from the rejects bin at the chip supplier, Orion. It is not even known if the Amstrad engineers in the UK added the board, or if the work was carried out by the Spanish distributor, Indescomp. Rumours and theories abound, but the pictures prove the existance of this fabled machine. 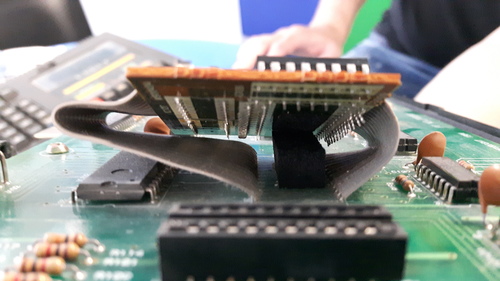 What you can't see from the picture is how stiff the cabling is. It is almost impossible to turn the board over any more than it is in this picture. That, at least, would make it difficult-to-impossible for a casual tax inspector to notice that the pins were not connected.

I think this story exemplifies the nature of the book - lots of stories, connected by numbers in ways you might not have considered. After all, for many people, the story of Amstrad begins with tape-to-tape cassette recorders, and ends with their purchase of Sinclair. Yet, in the Amstrad community this tale is as well-known as Roland!

So please send this update around your friend social media sites and online forums, so we help more retro computing fans discover something outside their usual circles!

A first edition hardback, the ebook and your name listed as a supporter.