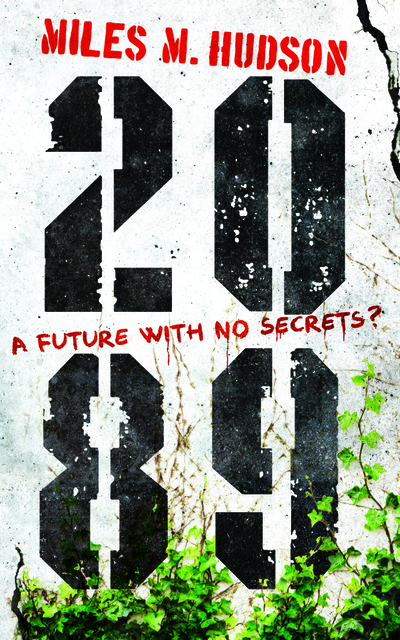 A revolutionary on the run from a brain-bugging surveillance society. How would we come to live if there could be no secrets: utopia or dystopia?

2089 is an action adventure, with socio-philosophical themes about surveillance in society, the over-reliance on technology, and how human communities should be structured, in order to make for a happy life. The story resonates with many issues that people are wrestling with right now. The year is 2089, and technologists have developed a system for remotely tapping into the optic and auditory nerves of all humans. Everything that people see and hear is detected and this is published publicly online; nothing can be secret. It is the ultimate surveillance society. Jack Smith becomes disillusioned with the omnipresent monitoring and he blows up the old GCHQ building in Cheltenham, destroying the surveillance computers. He goes on the run across a climate-changed, post-apocalyptic Gloucestershire, with old friend Vicky Truva. The two are chased by a ragtag posse, including Vicky’s brothers, intent on bringing the apparent revolutionaries to justice. However, the fugitives have the advantage that the information and surveillance network is down... This novel will fascinate anyone interested in questions about how we should live, as well as those who like a bit of an adventure yarn in an unusual setting, those upset with the political classes, or worried about climate change.

Once you've pledged for 2089 why not spread the love? Encourage 5 friends to pledge and add 'referred by [your name]' after their name at checkout. Once 5 of your friends have pledged, we'll upgrade you to Super Patron Paperback for free. It's a win win!